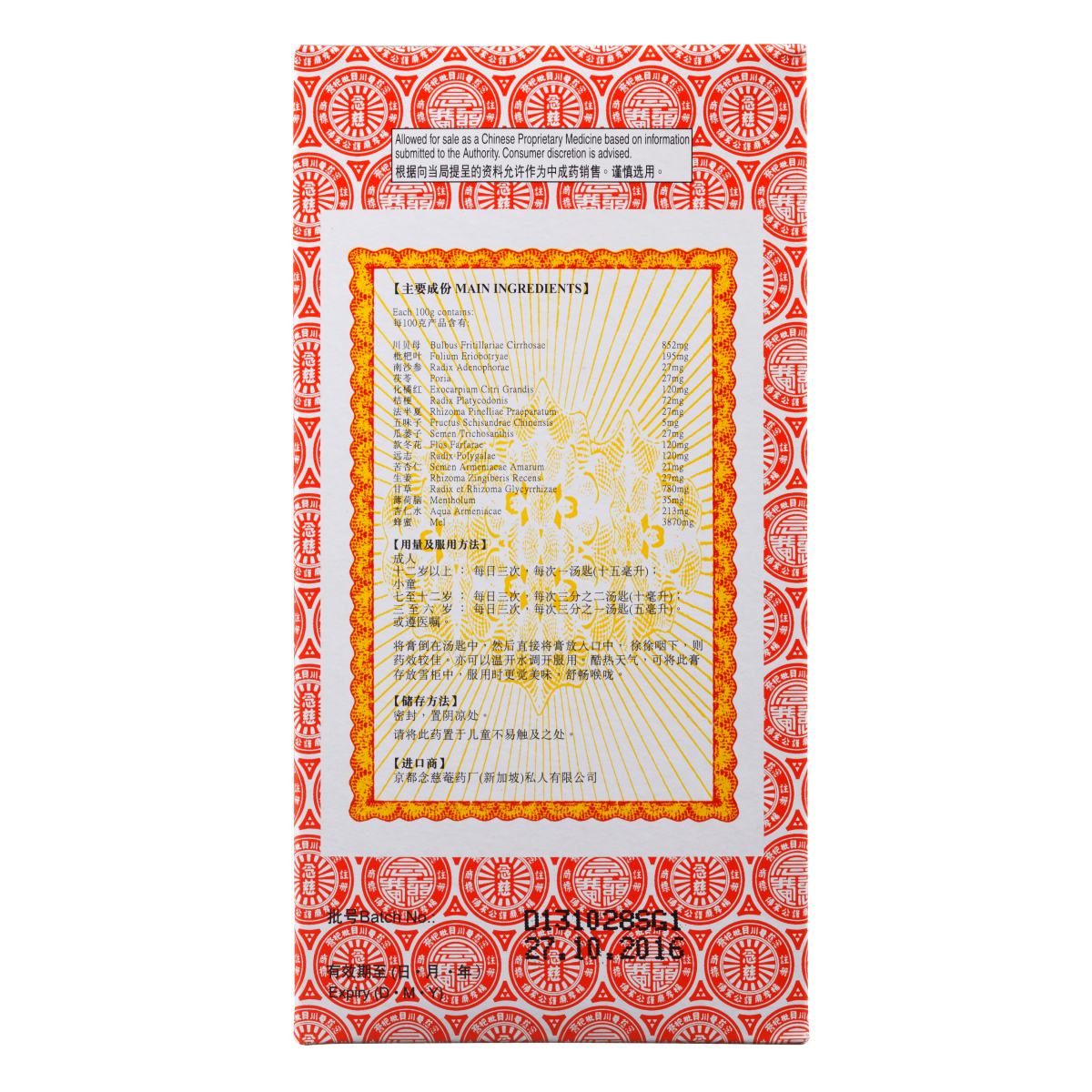 – Specially formulated with Chuan Bei , 14 other natural herbs and soothing honey, it eliminates phlegm, relieves cough, heatiness, throat dryness and irritation, hoarseness and voice loss
– Take daily to nourish lungs from within, targeting the root cause of respiratory illnesses
– A Convenient Pack in 10 liquid sachets is available for travelling and daily convenience. Just tear, squeeze and drink.
– A No Sugar Formula using Maltitol, an approved sweetener with low glycemic index, is available for people controlling sugar intake and it does not cause tooth decay.

Ship Only Within Singapore

Nin Jiom originates from a true story of Filial Piety. In the Qing dynasty a young boy, Yang Xiaolian, lived alone with his mother as his father had passed away. When his mother became very sick for months from a serious persistent cough and bronchial ailment, he went about looking for the best doctor to cure his mother. One fortunate day he met the famous doctor Ye Tian Shi. Dr Ye was deeply touched by Yang’s filial piety and gave him a secret formula for a cough syrup. Yang prepared the cough syrup and his mother was cured after taking it. Years later, she asked Yang to mass produce the cough syrup so that more people could benefit from it. He named it Nin Jiom which means “in memory of my mother”, reflecting his filial piety. Later, the Yang family sold the business to Chinese physician Tse Sui-Bong, the founder of today’s Nin Jiom Medicine (Mfy). H.K. Ltd. located in Hong Kong.

Nin Jiom has always made consumers’ health as its primary concern. It is devoted to scientific research and constantly develops new herbal products with advanced technologies and scientific methods; adopting stringent quality control processes for the selection of ingredients and modern state-of-the-art technologies for production with international standard machineries and equipment, including medicine preparation room, automatic filling and capping machines and quality control centre.

Nin Jiom owns its own farms for growing Chinese herbs in Tibetan Highlands.

Best Quality with No Compromise.

Trusted and loved since its launch in 1946, Nin Jiom Pei Pa Koa is renowned worldwide for its efficacy and good taste. In Feb 2018, it exploded in popularity in New York City when the Wall Street Journal reported a super quick relief in 15mins from protracted cough.
Nin Jiom Pei Pa Koa is also the first choice for voice hoarseness and voice loss among top singers worldwide including USA Grammy Award singers.